Welcome to our Museum 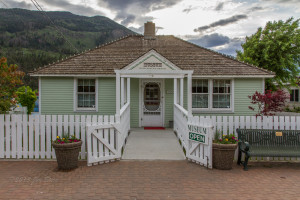 The building was a foreman’s house built by the Canadian National Railway in 1942. The Village of Lytton bought it 50 years later. After renovations in the early ’90s the Museum officially opened on July 1, 1995.

The Museum is a Commission of the Village, and the Village maintains the grounds and building.

The Museum is operated by a group of dedicated volunteers during the year and usually with hired helpers in the summer season.

Our mandate is to collect, preserve, research, exhibit and interpret objects of cultural, artistic, and historical value to the Lytton area. But sometimes, an offered donation is just too good to pass up, such as a portable tank periscope from WW II, a ‘diamond’ from New York, a ‘ribbon’ clock. Why not visit and see what other oddities you can find.

In most years we are usually visited by more than 1,000 people.   In 2015, we hosted 1220 visitors from 28 countries.  Although numbers were down this year, there were still visitors from 22 countries.  See some visitors’ comments here: